SANTA CLARA—The Santa Clara County Board of Education race is heating up heading into the final week of Election 2018, with current Mt. Pleasant School Board Trustee and progressive democrat Peter M. Ortiz facing off against Kiara Kassandra, a community liaison for San Jose Vice Mayor Magdalena Carrasco, for Trustee Area 6.

Ortiz has been viewed as the favored candidate to win, due to Kassandra’s low-profile campaign. The county board coordinates with other individual school districts below it in structure, and importantly provides academic and fiscal oversight to the districts.

But in the final week of the campaign, Ortiz’s criminal history has been brought to light by activists against his campaign.

In February 2012, Ortiz and his friend were arrested in San Jose and charged by the Santa Clara County District Attorney for Attempted Robbery in the Second Degree, a felony, allegedly in benefit of, direction of, and in furtherance of the Norteño criminal street gang with the specific intent of helping their criminal gang conduct.

According to the police reports in the case, as well as sworn statements from multiple witnesses within the case file that The Daily Fold has obtained and independently verified—Ortiz allegedly grabbed one of two victims while walking down a popular street in San Jose, saying “Norte motherfucker, Norte” before saying it to them again. “Norte” is the commonly used short form for the Norteño gang. Ortiz proceeded to punch one of the victims in the face repeatedly until he gave his wallet to Ortiz and the other suspect.

The other victim was able to run away to seek help by calling the police in between Ortiz’s alleged assault of one of the victims, which prompted Ortiz and the other suspect to leave the scene to avoid gaining attention.

In a police report filed by San Jose Police Sgt. Jesser, Ortiz was asked to stop and get on the ground by approaching police officers, which at that point Ortiz yelled “Fuck you, fuck you.” Sgt. Jesser then approached Ortiz again, this time with his issued firearm drawn, to ask him to stop and lay on the ground, which Ortiz finally obliged.

Ortiz began calling the arresting officers “racist”, but nothing in the officers’ conduct in the case file suggests that anything racist occurred. Ortiz then repeatedly told them to “shoot me mother fuckers, just kill me.” The officer claimed that Ortiz was “obviously intoxicated”.

Ortiz repeated his threat multiple times and became very agitated and upset toward the officers, according to the case file.

Ortiz allegedly began to resist, and started to walk away multiple times until the officers grabbed him in order to place him down. Ortiz then fell down on his back, spitting blood in the air and continued to ask the officers to “kill [me], shoot [me] in the head, and beat [me] up.” Ortiz was then put into the squad car and taken in for fingerprinting and further medical treatment.

The case was eventually settled several months later in May 2012, with Ortiz promising to go through community rehabilitation to sever his gang ties, as well as periodic check-ins and a promise to no longer engage in any type of gang-related, violent activities. The case was dismissed without prejudice, having allowed prosecutors then to reserve the right to charge him again.

To Ortiz’s credit, he has been open on social media about how community service helped guide him away from his gang activity that surrounded him during his youth. However, Ortiz has not been clear regarding how recent and disturbing the allegations were. His previous gang activity is also currently missing from his official campaign website.

Sources close to The Daily Fold claim that Ortiz has been working to keep his previous discretions with the law out of light, talking down the charges to his supporters, and claiming that he’s reformed. However, sources further claim that some in the community think he has been dishonest regarding the severity of the claims. Some claim they continue to fear him.

[Editors’ Note: Portions of the case file have Ortiz’s birthday written incorrectly and correctly at times. As seen in one of the charging documents below, his correct birthday is October 10, 1989.] 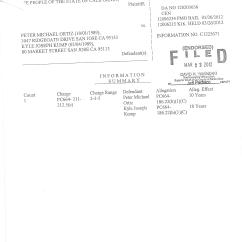 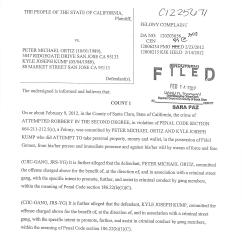 Overhear something? Are you a whistleblower? Hear a rumor you want us to investigate? Got a tip? Contact us at our secure, encrypted ProtonMail e-mail address: thedailyfold@protonmail.com

Contact us at our secure, encrypted ProtonMail e-mail address: thedailyfold@protonmail.com