SAN JOSE—As the last few weeks have shined a light on partisan preferences in the media with the way issues like the coronavirus lockdowns, police shootings, and now the sexual assault allegations against Joe Biden by Tara Reade are covered—San Jose Inside in particular has eaten its words and blatantly shown its double standards.

A Company Run by Criminals

San Jose Inside is known for pontificating on the legal indiscretions by those involved in the local political and nonprofit communities of Silicon Valley. But little is known about the people who run the blog and paper itself.

Dan Pulcrano is the CEO and Owner of San Jose Inside and its parent company Metro Newspaper. In recent weeks, he seems to be desperately trying to clamp down on local media control with his purchase of East Bay weekly the East Bay Express, possibly because his own paper has lost readers due to new competition in the Silicon Valley area. Maybe it’s also because he needs more cover for when he tweets stupid things like straight people being unfairly targeted, when a straight pride parade was suggested months ago.

Pulcrano himself is no stranger to the criminal justice system. In 2010, Pulcrano was arrested for DUI, with excessive drinking, and for evading police in a car chase when they tried to pull him over. Just before the arrest, the police reports claimed Pulcrano was meeting with ‘Russian businessmen’.

According to public court filings, Pulcrano’s car was spotted near San Jose State University dangerously driving without lights on around an area with high-foot traffic. When Pulcrano began accelerating and swerving, the police officers attempted to pull him over.

That’s when officer’s claimed in their report that Pulcrano ignored their sirens and continued to drive down E. San Salvador Street in San Jose, skipping stop signs. Things heated up further when Pulcrano reached his house and tried to park his car in the home’s garage while still trying to evade police.

The officer who arrived to his house saw Pulcrano exit his vehicle and stand next to his car in his house’s garage, Pulcrano allegedly grinning and staring at the officers as the door closed.

The officer claimed he immediately drew his issued firearm, shined his flashlight on Pulcrano and ordered him to stop. When Pulcrano then reached into his car to retrieve something, and with the officer fearing for his life—the officer jumped into the garage just as it closed to prevent Pulcrano from escaping or retrieving a possible firearm. The officer then forced Pulcrano into a Department-approved wrist lock when Pulcrano tried to resist arrest again and pull away, however the officer maintained control.

When questioned, officers claim a disheleved and alcohol soaked Pulcrano said he was a “close confidant and advisor to Sheriff Laurie Smith” and that he “supports” the police, through his slurred speech. Officers claim then that Pulcrano produced an “Honorary Deputy Sheriff with the Office of the County Sheriff” card given to Pulcrano by Sheriff Smith, which had apparently expired two years prior.

Pulcrano continued to claim he was an “advisor” to Sheriff Laurie Smith when officers asked him if he was a county employee and he could not answer them. Sheriff Smith has also received preferential treatment by San Jose Inside during election years. Pulcrano was literally drunk with power.

The name-dropping by Pulcrano apparently wasn’t enough to get him out of the sticky situation and police officers later arrested him, ending the standoff, and booked him when they suspected he was under the influence and for evading police. He was released on $30,000 bail.

Pulcrano has had his fair share of controversy. Sources close to a former employee claim that he ran the company ‘in a shady manner’ when trying to acquire its new office buildings, including allegedly changing former staffers’ statuses to independent contractors after the fact in order to avoid paying additional costs, when the blog itself has accused other companies of doing so.

Pulcrano and San Jose Inside were also accused of taking money from sex classified ad websites such as the now-defunct Backpage.com, that even the U.N. itself has previously claimed can promote human trafficking.

Pulcrano is not the only member of the San Jose Inside and Metro family to have a run in with the law. Jennifer Wadsworth, a former staff writer and now News Editor for San Jose Inside, was charged in 2013 with a DUI, with excessive drinking and a BAC of 0.15% or greater, as well as allegedly driving with a suspended driver’s license.

According to the police report, CHP-dispatched local officers received reports that a car driven by Wadsworth was continuously and dangerously swerving left and right on I-880. When the arresting officers contacted Wadsworth through the window, who officers claim had just left a pool party and was barefoot and in only a white shirt and black bikini, Wadsworth reeked of alcohol which prompted the officers to begin field sobriety tests.

Wadsworth failed the tests and was later charged and booked. Officers claim she had double the legal limit to drive and had to ping her with an excessive drinking charge, according to California DUI laws.

Former News Editor Josh Koehn, who is currently the Associate Metro Editor at the San Francisco Chronicle was also recently divorced, according to public court filings. Maybe that’s because sources claim he allegedly has a casual relationship with the truth as evidenced by his oversight on multiple corrections, and is also allegedly controlling. According to sources, Koehn pressured and indirectly threatened a member of the Silicon Valley political community over Twitter direct messages when he called out Koehn’s reporting. The definite highlight of the public divorce records was Koehn asking for the court to award him his ‘White Men Can’t Jump’ art work.

Due Process For My Friends and Me, but Not For Thee…

San Jose Inside’s attack article on the recent Tara Reade sexual assault allegations against presumptive democratic-nominee Joe Biden is a sharp reversal from their previous stances, attacks, and Anti-Kavanaugh positions. It seems as though San Jose Inside and Metro now believe in due process and the presumption of innocence, which they hadn’t before in their previous pieces.

In 2016 and 2018, San Jose Inside reported on stolen documents involving data theft in a Silicon Valley congressional campaign, as well as the alleged illegal sharing of private personnel records of former Santa Clara County Supervisor Candidate Dominic Caserta, which he later sued over. Caserta continues to deny the sexual misconduct claims against him perpetrated by San Jose Inside, which local law enforcement decided to not prosecute over a lack of evidence. The blog was also called out in now-deleted tweets by former Mercury News reporter Khalida Sarwari for their lackluster reporting.

Wadsworth has also been ‘called out’ in various comments and forums such as Reddit about her public ties to feminists and her failure to disclose when she presents herself as an objective reporter when covering the indiscretions of others. Multiple readers have previously brought this issue up in comments of Wadsworth’s stories. 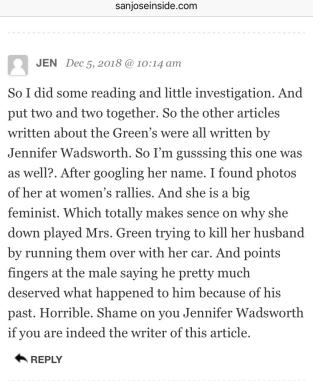 More often than not, San Jose Inside and Metro have been sued successfully multiple times before. There are multiple corrections that San Jose Inside has made due to their negligent reporting.

In 2017, San Jose Inside and parent company Metro were sued by a local organizer due to alleged careless and negligent reporting about his previous romantic relationship from almost ten years ago that turned mutually sour. Allegedly, the blog smeared Shaian Mohammadi, a local community organizer, cancer survivor, award-winning law graduate, a former legal operations intern, and reader of The Daily Fold, when according to court documents and court press they allowed his ex-girlfriend, who had her own legal issues according to public records, and other alleged issues according to screenshots of archived Facebook messages Mohammadi shared with local press years ago during the suit, to attack his character and name without proof which denied him due process.

What’s interesting is that although Mohammadi’s ex-girlfriend and Metro tried to #MeToo him during his race for a local democratic position, a growing trend in politics in recent years, there was never solid evidence of wrong-doing on archive searches or social media platforms to this day, or any legal orders or charges against him. The presumption of innocence is difficult to maintain in the current trial-by-media world. Many women, including prominent women in the local Democratic Party, came to his defense. The rest of the allegation against Mohammadi was later put to rest when supporters close to Mohammadi released correspondence between him and his ex-girlfriend, a former policy aide, which didn’t show any wrong-doing on his part. As well as Don Rocha later losing his race for County Supervisor, which this publication reported on, when his own divorce records came out and falsely accused his opponent of leaking them.

According to certified legal documents, Mohammadi took the high ground and voluntarily dismissed the suit in order to focus on the bar exam and health, and to his credit focus on his work as a Paralegal providing help to domestic violence survivors in applying for DV Lottery Visas. He claimed in his press release at the time that he and his family were also being harassed and pressured by presumed supporters of Metro to drop the case. Sounds like another senseless #MeToo wrongful conviction.

Leading up to Election Day 2018, San Jose Inside published, and then secretly deleted, a conspiratorial and sexist hit piece by ‘housing activist’ Shaunn Cartwright.

Shockingly, local press in recent years have allowed Cartwright to speak on the record as an expert on this issue, but online research shows Cartwright has been accused on forums and in comments over the years of having kicked out activists from their tents during the Occupy San Jose protests in 2011, allegedly singling them out if they looked homeless. Some of these activists had nowhere else to go.

During some backlash in the community, San Jose Inside and Metro secretly took down the Cartwright op-ed hit piece, as well as its tweet to the link, without informing the public and their readers of doing so, breaking journalistic integrity once again. Below are the screenshots of the now-deleted article.

San Jose Inside also tried to take credit for breaking the former California Democratic Party Chairman Eric Bauman’s sexual harassment scandal and resignation, although official tweets and timestamps show The Daily Fold was first in doing so. Jealousy is never a good look.

[Image Courtesy of Instagram and Google Images; TDF does not maintain ownership]

This article has been updated.

Overhear something? Are you a whistleblower? Hear a rumor you want us to investigate? Got a tip? Contact us at our secure, encrypted ProtonMail e-mail address:thedailyfold@protonmail.com

Contact us at our secure, encrypted ProtonMail e-mail address: thedailyfold@protonmail.com